Table Mountain, according to the Khoi & the San, is often seen magestically covered by a blanket of clouds, and was known as Hu-!Gais meaning “veiled in clouds”, and seen as a Sacred & Spiritual Mountain covered by the Spirit of their All Mighty Supreme God known as Tsui//Goab “he gives rain, he makes the clouds, he lives in the clouds, and he makes our cows & our sheep fruitful”: T.Haan 1881.

Table Mountain was also known as Hoerikwaggo “Mountain in the sea”.
Table Mountain according to African legend:  Tixo, God of the Sun, and Djobela, the One Eyed Earth Goddess conceived Qamata, who created the world.  The Great Sea Dragon, Nkanyamba was so jealous that he fought & wounded Qamata, trying to stop him creating dry land.  But the Earth Mother, Djobela, came to Qamata’s aid, creating four mighty Giants to guard the corners of the Earth…. After many battles with the Sea Dragon the Giants were mortally wounded.  Before they died they asked the Earth Mother to turn them into Mountains, so that even in death they could guard the Earth.  And so the Greatest Giant of All, Umlindi Wemingizimu became Table Mountain, the Watcher of the South. 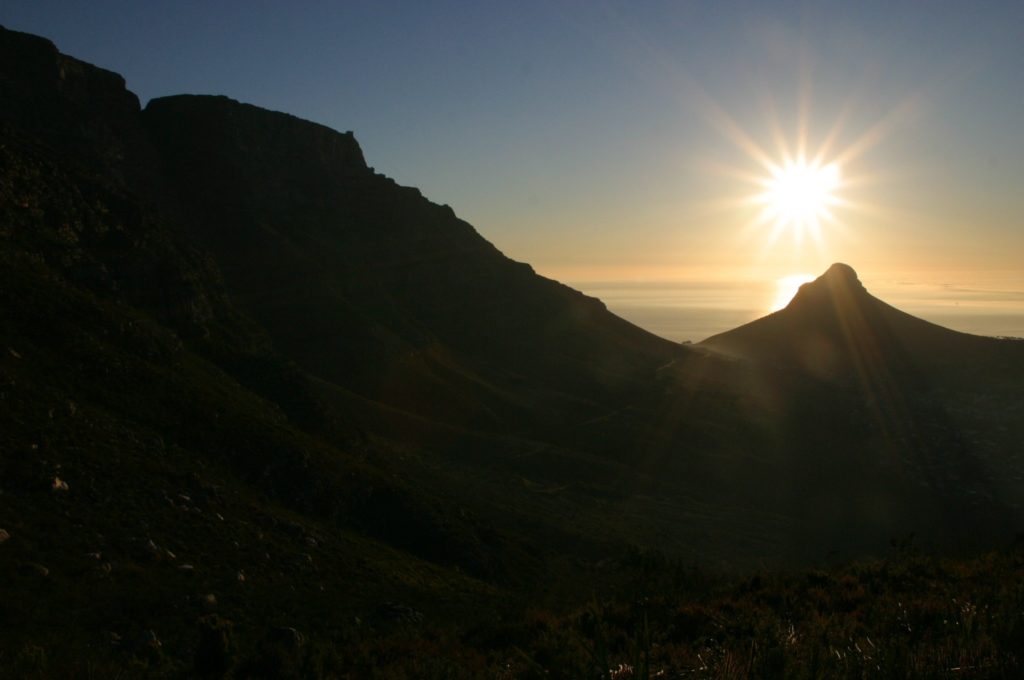 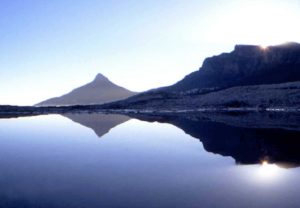 We the SSF will continuously be acting as guardians watching and making sure that developments on and around Table Mountain are not encroaching on Sacred Sites, or polluting the natural springs that sustain life. We will continue to raise awareness of the Historical, Cultural and Spiritual Significance of Table Mountain and these many springs & caves. High Impact Sites for immediate attention & research, all on Table Mountain: Peers Burial Cave & Ascension Cave in the Sun Valley on Ou Kaapse Weg, Logies Rocks at Llandudno, Woodstock cave, the Camissa River and including all annual springs surrounding Table Mountain.

Stone Age tools going back over 100 000 years have been found in caves and shelters surrounding Table Mountain, even a carved stone head was found on sinal hill.  Many Khoi and San artifacts ostrige egg shell beads, holed stones, grinding stones stained with Red Ochre, and much more have been found.  Some of these artifacts are in the South African Iziko Museum in Cape Town, some may be held in UCT, and also the museum archives.

Table Mountain is a place that over the years has brought together many hundreds and thousands of people together in prayer and ceremony. We will continue to hold such gatherings and prayer ceremonies that provide a platform for people and communities to put aside there differences and come together and share their prayers and intentions for Humanity and our Planet, forming together a unified spirit consciouness that has a respect and love of All Life!

Perhaps Umlindi Wemingizimu is the Table Mountain Goddess seen in the photograph below.

Clck Here to buy a set of Greeting Cards, a “Table Mountain Rocks” TSHIRT or Dean’s Book or DVD “Pathways of the Sun – An awakening”