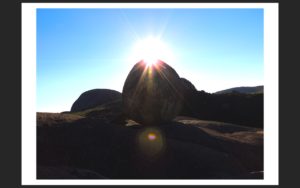 OUR CUSTODIANSHIP AND COMMUNITY INITIATIVES FOR: PAARL ROCK

Each Sacred Site across Southern Africa has the potential to not only uplift the broken spirit of our Indigenous People, but to empower them by creating jobs that honour their cultural life ways and ancestry through interpretive centres, new social economic upliftment possibilities, tour guides, site maintenance and management and security, inspiring the arts and culture and stimulating other informal trades that always surround such new tourism destinations, which will in turn stimulate the surrounding communities,  B&Bs, shops, restaurants, hotels etc. 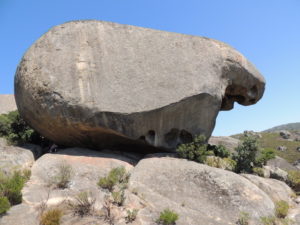 Above a huge Megalithic Hippo Rock on Paarl Mountain a symbol of fertility.

Overview: Paarl Mountain is the 3rd largest granite outcrop in the world. In 1657, this giant granite rock, glistening in the sun after rains, was seen by Abraham Gabemma while he was searching for game/meat resources for the Dutch immigrants that had recently arrived at the  Cape of Good Hope. He named this granite rock, “de Diamondt” and “de Peerlberg”, “The Diamond and Pearl Mountain”. At that time the Mountain was known by the local Khoekhoin and San Bushman as the Tortoise Mountain. It is a Heritage Site, and is also the Mountain chosen for the placement of the Afrikaaner Taal Monument.

Paarl Mountain was known by the Early Khoisan people as Tortoise Mountain.

The biggest survival attraction is the great water resources, the biggest being Berg River, directly below Paarl Mountain and subsequent fertile valley’s, of the Drakenstein, Paarl Franchhoek and Stellenbosch area with much lush vegetation, with lots of natural plant and animal food resources. The Valley first attracted a great many animals, lions, elephant, hippo, water buffalo, and various buck species. This in turn attracted our first Stone Age hunter gatherer inhabitants, of this Mountain and Surrounding Valley, Homo Heidelbergenis, Homo Ergastor/Erectus

Stone artefacts “Auchelean Handaxes” dating to the Early Stone Age (700 000 – 250 000 years ago) and the Middle Stone Age artefacts (150 000 –30 000 years ago) have been found in ploughed agricultural fields in the surrounding area, along river banks and mountain slopes. About 2000 years ago, Khoekhoe herders moved into the area which they visited seasonally (mostly summer)to graze their cattle, the colonial settlement of the area, caused friction and Inhabitants and immigrants The Berg River Valley formed the traditional border between the Peninsular Khoekhoen (the Gorachoqua and the Goringhaiqua) and the Cochoqua. The Peninsulars grazed their cattle between the Hottentots Holland Mountains and the Cape Peninsula and possibly as far north as Malmesbury. The Chariguriqua appear to have occupied the lower Berg River and points around the Piketberg and the Cochoqua the land from Saldanha Bay and the Vredenburg Peninsula across to Porterville. The Caledon plains were occupied by the Chainoqua, a large and powerful group who later brought stock to trade with the colony. Map from Valentyn’s Travels (1971) compiled from various sources c.1720. The Drakenstein region was ‘discovered’ by Europeans while on expeditions to barter for cattle with the Khoekhoen. Sanhunter-gatherer resources had been compromised by the introduction of Khoekhoen livestock (sheep, goats and cattle) about 2000 years ago and most San groups left the area. Relationships between the Khokhoen and VOC settlers started well, but ended badly with fighting, the Khoikhoen were eventually forced away and blocked from water sources and grazing and some were enslaved on the colonial farms.

1911 : Louis Peringuey was first to dicover ESA implements in the Stellenbosch/Drakenstein, his report in 1911 “The Stone Ages of South Africa” . He discovered ( Auchilean and oldavan) handaxes and cleavers dating between 1. 2million and 250 000 years old at the foot of Pappagaaiberg at a site next to a  small stream a tributary to the Eerste river. “Bosman’s Crossing site”. At present day Adam Tas Bridge.

1929 – Goodwin and Van Riet Lowe (1929)  discovered Early Stone Age implements in an eroded gulley on the lower slopes of the Simonsberg in the Drakenstein Valley, Pontac Hill Pomona estate.

1998 –  Kaplan recorded Auchilian artefact in the Veldwagtersrivier catchment, Papegaaiberg and Krommerivier Farm. Consisting of  large cleavers, choppers, handaxes, flakes and cobbles and cores, most made of sandstone, some of quartzite and darker ironstone

“Homo ergaster/erectus made earlier Acheulean artefacts before roughly 600 ky ago, while early or ‘archaic’ Homo sapiens made later ones, after 600 ky ago. Much new research will be necessary to determine if the passage from H. ergaster/ erectus to ‘archaic’ H. sapiens was gradual or sudden and whether it was accompanied by gradual or relatively rapid change in accompanying Acheulean artefacts.

Middle Stone Hunter-gatherers continued to live in the surrounding landscape throughout the MSA (500,000 to between 50-25,000 years ago) MSA artifacts have been found in ploughed agricultural fields in the surrounding area, along river banks and mountain slopes a single MSA type convergent flake was found on a pathway on Paarl Mountain, near the Paarl Rock Site researched in this paper.

A large number of MSA artifacts found at a cave site in Wemmershoek, consisting mostly of flakes and cores and a few blades. Surface artifacts were found at Solms-Delta Farm near the the confluence of the Dwars and Berg rivers, at Klapmutskop large flakes cores and bifacial flaking.

LSA pottery was found at a site discovered on the farm Solms-Delta between Simondium and Franschhoek. The LSA tool assemblages are mostly characterised by retouched stone tool types: segments, backed bladelets and backed scrapers Orton 2005 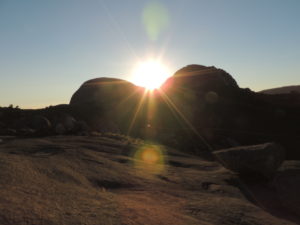 The Paarl Rock Summer Solstice Sunset Alignment, (the southernmost sunset) is a typical Megalithic Sun Temple Alignment with the Two Highest Peaks Bretagne and Gordon Rocks the “Breasts”, The Cleavage between the two, forming the Female Gateway, an inverted “V” shaped Triangle, representing the Female Yoni and sexual organ and pubic mound, recognised and engraved into some of the earliest Mother Goddess Effergies like the Venus of Villendorf some 30 000yrs old, see pic XX . This “V’ in Landscape Archaeo-astronomical terms forms the “Foresight” of the (inner ring) horizon calendar (like the sights on a rifle) of this alignment. The Summer Solstice Sun sets directly between the “breasts” centred on this “V” gateway, sending a “Sun Dagger”, ray of light, creating a golden path of light across the landscape like a torch beam, to be channelled and to hit directly onto the Pearl, ( Seed/EGG) at sunset. (A large flat boulder is centred on this path as well and may well have been an important part of this potential Sun Temple alignment) At this time the Sun is still 5.7 degrees above the horizon and  at this precise time 19:20pm  – 19:24pm is seen in alignment also with the Sun Gate in Cape Town Between Lions Head and Table Mountain, another important Horizon Calendar Gateway, this forms the “Long Sight” to the (outer  ring) sunset Landscape Horizon Calendar, of the Cape Peninsula. The exact astronomical details, are seen here below in picXXX. The actual alignment recorded pic XXX

The granite rock in many cultures is regarded as the “Bones of Mother Earth” often bearing quartz crystals, mica, feldspar, that shine and sparkle in the sunlight…these qualities would have added to the magical properties of this chosen site.

The large rounded shape of the Paarl Mountain and the massive rounded granite boulders, represents as in many prehistoric upper Palaeolithic cultures around the world, the swollen pregnant belly, the Fat Buttocks and the Breasts, all being natural manifestations representing the Fertility, the Womb and Life Giving and Nurturing aspects of  the Earth Mother, the Spiritual Consciousness of ancient times.  It is Mountains and Landscapes like these, that were regarded and used as Sacred Fertility Temple sites, with Cosmic Alignments to the Sun (Divine Masculine) and Moon (Divine Feminine), by the ancient hunter gathers of the time. Paarl is one of these special Mountains that honour the Sacred Earth Mother and Her Fertility.

The female breast like form of the sun gate alignment, would have added to the fertility aspect of this site, honouring of the Divine Earth Mother/ goddess, her Great nurturing of life, through these symbolic huge “Breasts” large enough to nurture many, much life.

The “V” like shape between the breasts, ( Bretagne and Gordon Rocks ) the two Highest and most prominent, outcrops on Paarl Mountain,  also symbolises the Sacred Yoni, Pubic Triangle reproductive part of the Female/Mother, that on the Solstice sunset, receives the last dying ray, the life force of the Father/masculine Sun, in a divine cosmic love making and seeding of Life ritual, as the symbolic “semen”, the ray of golden  sunlight, enters the ‘V” vagina, womb entrance of the Mother and impregnates Her  the actual “Seed/Egg” Paarl Rock, a symbolic seeding of “The Fire of Life” the Sun into the Female Seed/Egg in its last dying moment, to ensure that Life would be reborn. Hence the re-naming of this Sacred Rock to the “Seed of Light and Hope” by the researcher and rediscoverer of this site Dean Liprini