The Sacred Site Foundation of Southern Africa has submitted a proposal to Table Mountain National Park c/o SANParks to help create a Community Custodianship Initiative for the Safe Guarding of this public space and Sacred Site.

We have made in roads to the surrounding communities of Kalk Bay and Ocean View, met with some Elders and found individuals interested in and others currently being trained as guides and custodians of Peers Cave. Chief Bia Ishmael Sabodien is now a director on the Sacred Sites Foundation Board, he is recognized as the Khoi Chief of the Gorachouqua Tribe, for the Peers Cave and South Peninsula area.

We have developed a Khoi Trail using local guides and herbalist bushdoctors, a safe hike initiative. We clean up the caves and shelters on our regular walks. We encourage those drawn to the mountain and sacred sites for prayer, to maintain a clean and tread lightly approach to their visits. We have initiated a reseeding of indigenous medicinal and edible plants back into the surrounding mountains, to support sustainable local wild harvesting. 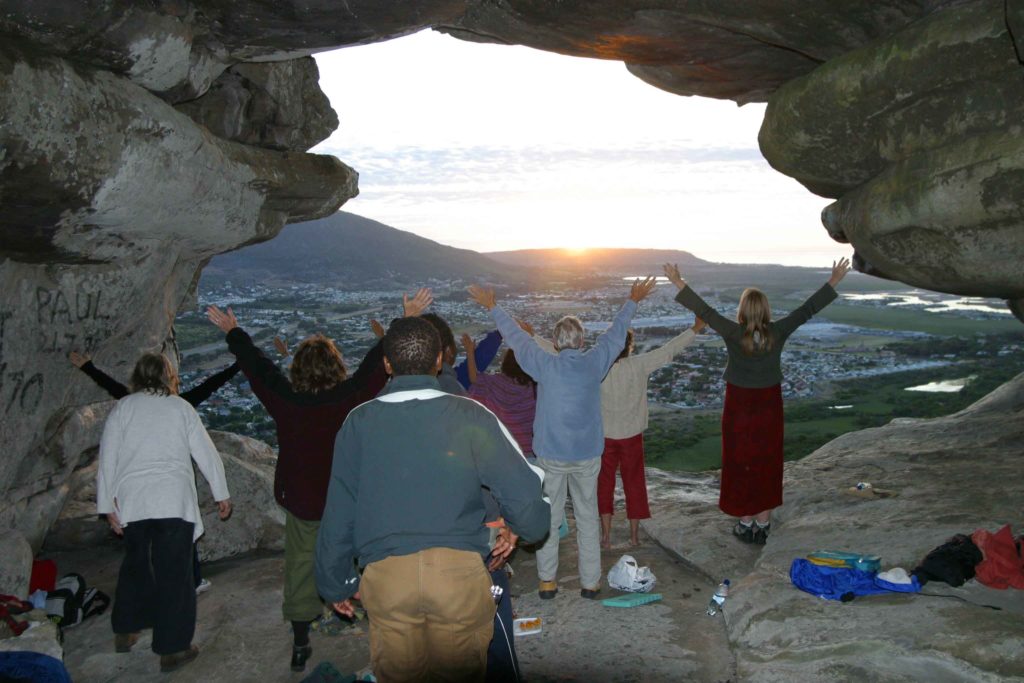 This is a GREAT MOTHER CAVE, a sacred sanctuary chosen for shelter by many ancient people for thousands of years.  It is one of the most southern Rock Art Sites in the whole of Africa.  It was also a sacred burial ground where more than 14 human skeletons were very unceremonially removed in the early 1920’s. It is, like all caves a giant womb, that could shelter more than 100 people from danger and bad weather. It is also seen to be guarded or watched over by two great stone guardians, who’s eyes gaze vertically upward to the Mid-Heaven and horizontally to the Earth Plane, uniting the Heavenly and Earthly planes at this Sacred Cave. This cave is found in a large female earth energy flowing southwards out the Silvermine Valley, southwards down the Cape Peninsula towards Cape Point. Archaeoastronomy Research for this cave is discussed more by Dean Liprini in his book “Pathways of the Sun – Unveiling the Mysteries of Table Mountain and Beyond”.

TUNNEL(Ascension)CAVE: is another Sacred Cave that symbolises the Female / Mother in the form of a Great Birthing Canal 50ft long by 27ft wide, formed in Metamophic Crystalised Quartzitic Sandstone = the Crystal Tunnel – Cave of Ascension.

This cave has been divinely orientated perfectly to center on the setting sun on the day of Great Light, the Summer Solstice. This Ascension Cave becomes a Sacred Earth Temple Site that marks to the Summer solstice of the most Southerly Sunset on the continent of Africa, the Longet Day and turning point of the Sun. On this day the Father Sun is seen to impregnate the womb of the Mother through this sacred birthing canal / tunnel.  This is a sacred space that one feels one’s spirit and soul can take off, be lifted, ascended to the light, hence the name Ascension Cave.

Every year on the Summer solstice the Sacred Site Foundation of Southern Africa hosts a ceremonial gathering here in this cave, at which all are welcome.

See the dates & times of tours to this very special Sacred Cave, regular tours on our EVENTS page.